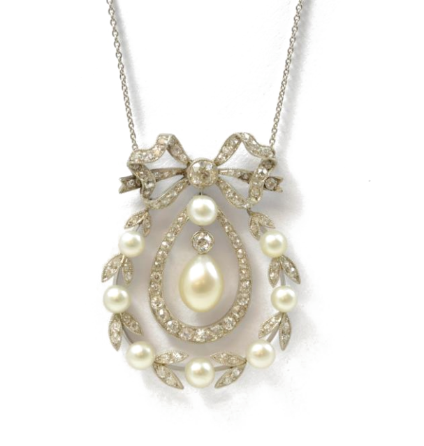 The mainstream jewellers turned to the art of late eighteenth century France to provide the motifs for elegant “garland style” diamond jewellery now executed in platinum rather than silver and gold. The brightness and superior hardness of this metal resulted in much lighter, more precisely modelled settings. At night tiaras were worn high on the head, and important stomachers occupied the front of low cut dresses, while every woman of means possessed quantities of brooches, bracelets, chains and pendants for daytime.

Because diamonds were no longer in short supply the string of perfectly matched graduated pearls became the Edwardian status symbol par excellence. This passion for diamonds and pearls meant that the Art Nouveau movement was over by 1910, and support for the Arts and Crafts Society also declined.